Caraway has a special non-standard Pacific Seacraft bowsprit and many brilliant improvements.

Custom teak box to replace companionway steps. Makes better use of the space for stowage and bigger area to sit/stand on. There is a bin in the centre and mug space and coffee pot space on the right and a very useful locker on the left.  The hatch above conceals another useful storage space for bottles of wine and so on.

Staysail on a Whickham-Martin furler. Mainsail with third reef for safe and thrilling heavy weather sailing. Caraway here with wind on quarter in F7-8 Mistral in the South of France.

She has an Aquadrive flexible coupling and sound-proofed engine bay.

BEP gauge fitted to monitor batteries and fuel/water tanks plus senders. With this you know exactly what condition your batteries are in at all times. There are alarms to tell you when you are running low and you know how much fuel and water you have left.

Dyneema halyards for main, genoa and staysail (2009). Plus all new sheets.

Two anchors, Fortress and Delta plus chain and warp.

Fold out teak shelf to left of galley.

Caraway has the enclosed head compartment and a new groco HF series toilet. She also has a holding tank and macerator fitted new in 2008.

Caraway was purchased new by Julian Vyner and shipped to Cornwall in the UK in 1993. Robin Benjamin looked after Caraway for a couple of years and sailed her to various destinations along the South Coast of England for her owner. She survived a gale off Portland Bill where she was knocked down running before big seas but emerged unscathed. She sailed the full length of the English Channel and cruised from Burnham on Crouch on the East Coast north of the Thames. There is a picture of her in an early Flicka Friends issue sailing under Tower Bridge in the heart of the City of London!

After  some years of occasional use, she was bought by Angus Beare in 2002. Her new owner sailed her back to Chichester on the South Coast where she given an overhaul and sailed regularly in the solent. She was then sailed to Brighton for a summer where she sailed most weekends taking friends on short fishing trips under sail.

In June 2003, Angus Beare and Robin Benjamin sailed Caraway across the English Channel to Calais where the mast was lowered and supported on deck and Caraway entered the French canals. Caraway continued to Reims where Robin took the train home to St Tropez and Angus took Caraway the rest of the way through France, emerging at Aigues Mortes in the Camargue region after some 600 miles of canals and over 200 locks.  You can read about the Flicka in France adventure here.

The mast was stepped at Port Camargue and the sails bent on and Caraway made ready for the sea again.

Angus sailed Caraway alone along the French coast to the Bay of St. Tropez. The following year she sailed back and forth along the south coast of France from Cannes to Toulon, following the local coastal winds.

In 2005, CARAWAY sailed from Cannes to Corsica (with new crew member Nina) (100) miles and encountered an unforecast summer mistral with winds reaching force 8 and very large seas some 35 miles from the north Corsican coast. She survived unscathed and relieved to arrive at Calvi early in the morning. After a few nights in Calvi, Caraway sailed on around the north coast, down the West Coast, through the straights of Bonifaccio and up the West coast to Ajaccio, stopping at various anchorages and ports along the way. From Ajaccio she sailed to Mahon in Minorca (250) miles and then circumnavigated Minorca. In Sept 2005 she was sailed single handed by Angus from Fornells Bay in Minorca back to the Bay of St Tropez (240 miles).

Caraway was then sailed for another season along the French coast with Nina joining in Cannes. She was then sailed from Bandol across to Minorca; again seeing whales and dolphins along the way. Caraway was laid up for the winter in a yard in Minorca and then worked on by Angus in May and September. She went back in the water in September and was sailed back to France in October by Angus single handed again (240 miles). She remained on a mooring in Port Grimaud for the winter.

The following season Caraway was sailed by Angus and Nina from Port Grimaud to Cannes. From Cannes all the way West via Freol, Marseille, Port Camargue, Port Vendres etc to the Spanish coast. With many other stops along the way.

From Estertit on the Spanish coast she crossed to Fornells, Minorca catching a large tuna along the way which fed ten people on Minorca.

In October she was sailed back from Fornells, Minorca to Port Cogolin in France via the island of Porquerolles. Again single handed by Angus.

In spring 2009 she ran before a steady force 7 from Port Cogolin to Cannes with Nina and Angus enjoying every minute of the ride. Staysail and double reefed main until in the lee of the Esterel range where things calmed down.

From Cannes she cruised along the Italian coast to Genoa and Livorno and the Bay of Poets. She explored the islands of Elbe and Capraia. From there she crossed  to Machinaggio on the North East tip of Corsica in a force 7 with nasty seas that became steadily more confused as she neared the port.

From Machinaggio she crossed back to St Remo on the Italian coast in one very long day and then back to Cannes over the next few days via Menton.

On arrival at Cannes she was refused a mooring that had previously been promised and since there were no others available nearby she was put onto a trailer at La Napoule and driven all the way home to Dorset, England. 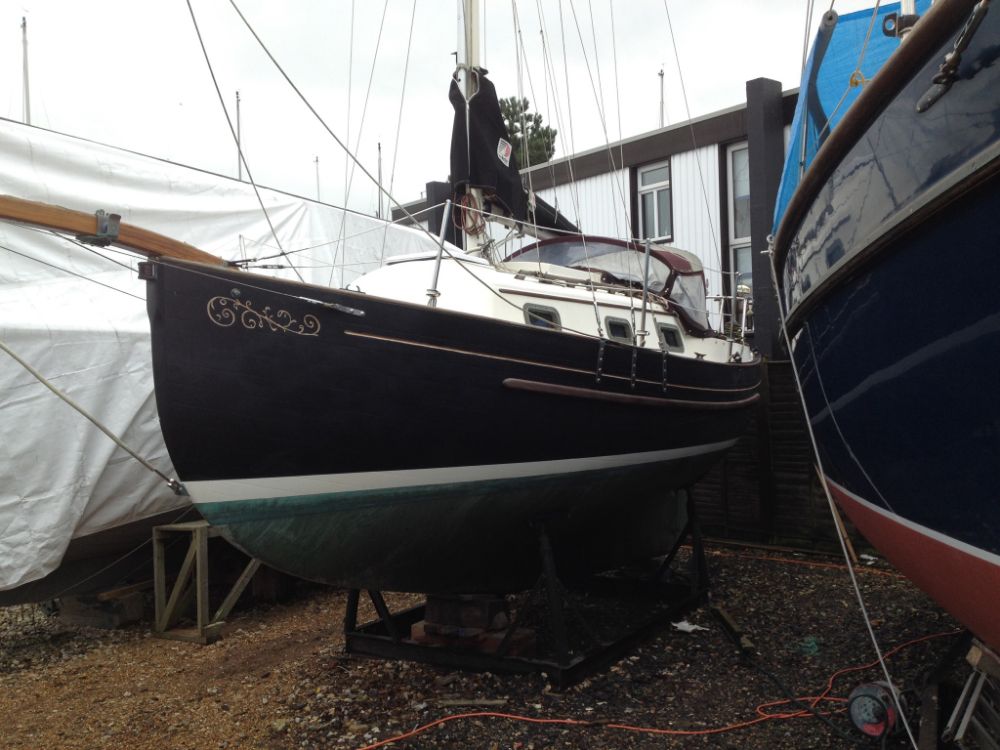 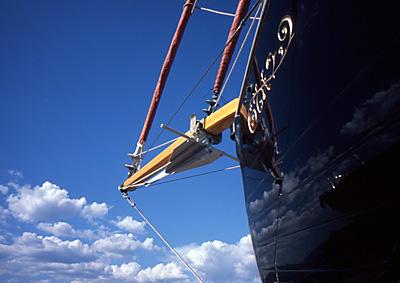 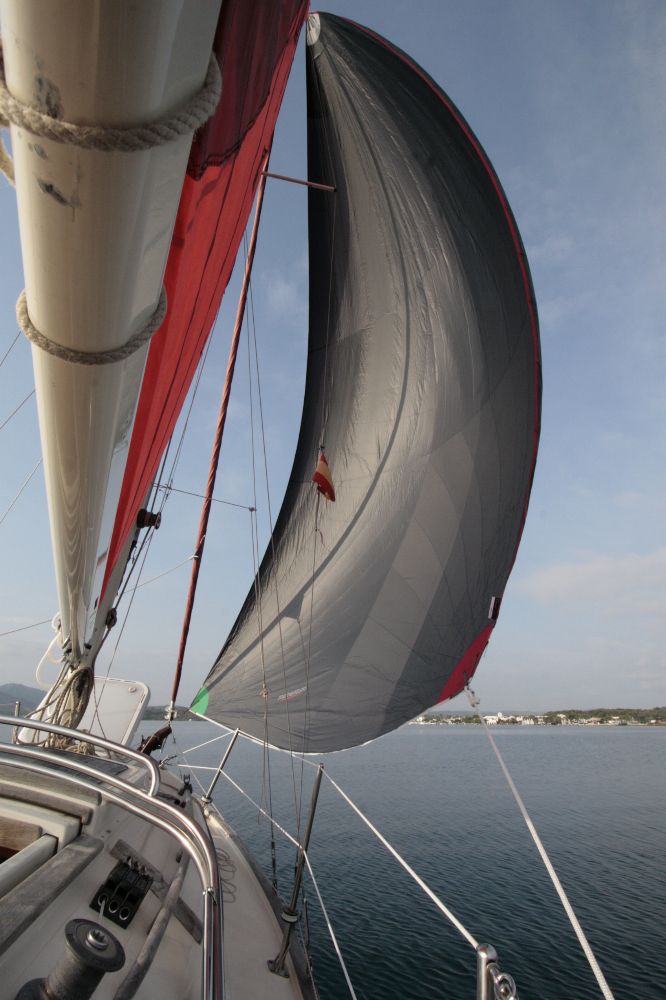 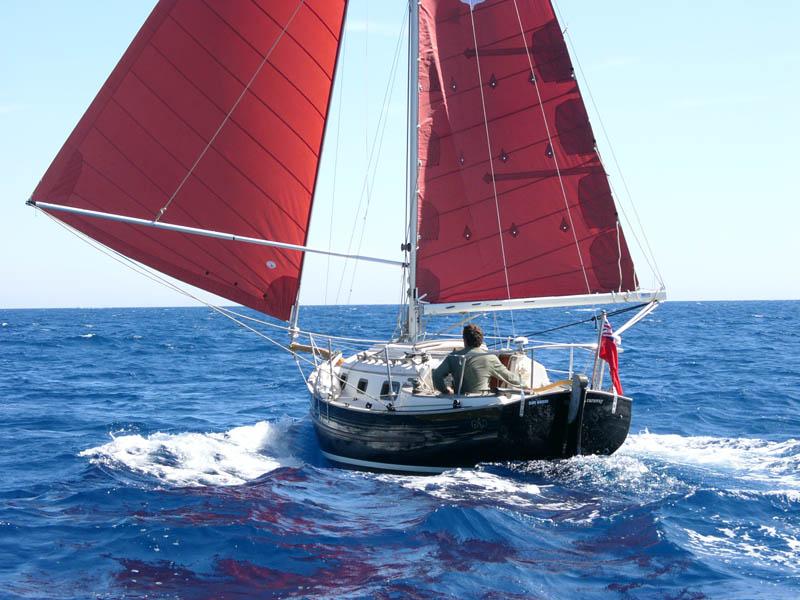 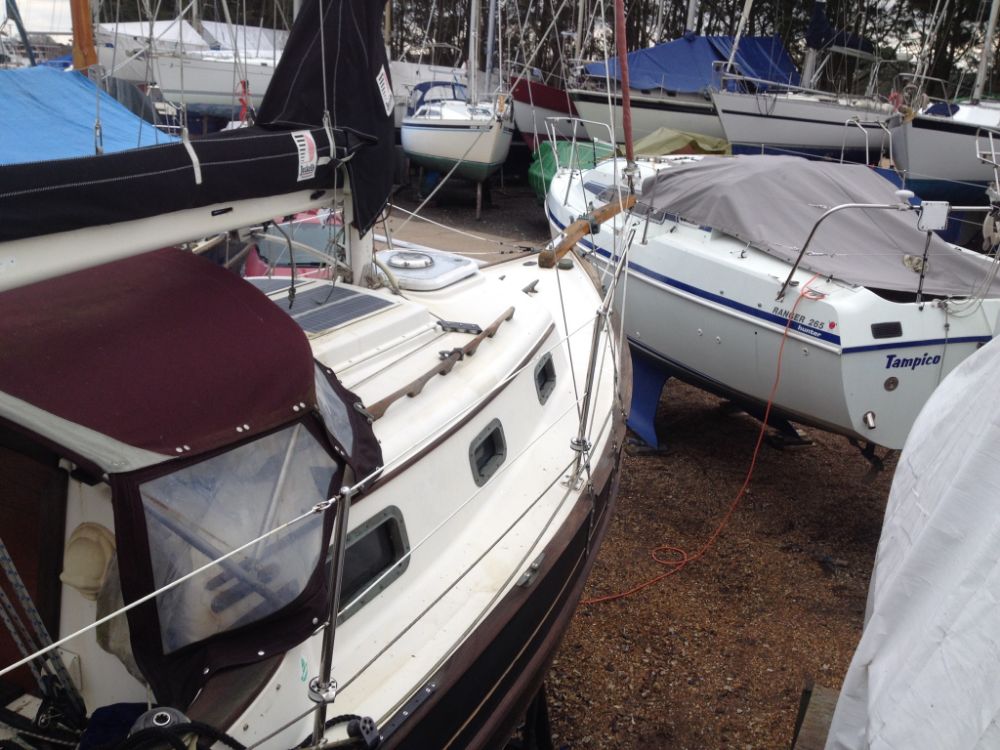