Nothing is known about Sabrina's current location or the 6000 miles Bruce and Katy sailed in her. If anyone knows anything please contact the web captain.

"I'm not clairvoyant, just subject to the same fantasy. For many enthusiasts, the Flicka is the quintessential small sailboat. Priced at nearly $100,000 in 1998, this three-ton blue-water cruiser will for most remain the stuff of dreams. Nevertheless, we decided to take a closer look.

Naval Architect Bruce Bingham based his Flicka hull design on the exceptionally seaworthy, turn-of-the-century Newport work boats. While in the Navy in the fifties, Bingham stumbled onto a couple of these boats derelict on a river bank near North Kingstown, Rhode Island. Fascinated by their design, he made sketches and took some rough measurements. He learned that these rugged craft were sailed year-round by fishermen in the harsh conditions off the Rhode Island coast.

In the early 1970s Bingham opened his own design office. By 1972 he was offering plans for a stout, plumb-bow 20-footer called "Flicka," based on the Newport boats. After the favorable reception of his plans (over a five-year period, more than 400 sets were sold), Bingham began building a plug for a Flicka of his own, but circumstances forced its sale to Nor'star Marine in Santa Barbara before completion. Starting in 1975, Nor'star produced Flickas, either as owner-finished kits, or boats completed under contract by Westerly Marine of Costa Mesa. In 1977 Nor'star ceased production. In 1978 Pacific Seacraft bought the tooling and began building its version.

Over the years Flickas have been built from a number of materials to a variety of specifications. Pacific Seacraft reduced the deck camber which seems to account for the disparity in headroom measurements we found--variously listed as from 5' 11" to 6' 2". Flickas have been rigged as gaff cutters, yawls, mastheaded sloops, marconi cutters, schooners and junk rig, so some of our comments and those of owners will not apply to all examples.

In 1978 Pacific Seacraft completed hull number 25, and Bruce Bingham finally had his own Flicka-- Sabrina. Pacific Seacraft continued building Flickas until 1998, halting production after the completion of hull #434. Robin Bradshaw of Pacific Seacraft told SCA that production was ended for a variety of reasons. Flicka had become quite expensive, in part because its smaller size relative to other models precluded more than one person at a time working on it. Robin said the Flickas were literally "handmade," while the bigger boats might have as many as four persons working on them at once. The low number of man-hours per day spent on a Flicka tied up limited production space.

Robin told us Pacific Seacraft still has the tooling, and he wouldn't completely rule out production of another Flicka, although there are presently no plans to do so. Pacific Seacraft does, however, continue to support the boat fully. Robin and the staff are happy to help with replacement parts and other questions about the boat he considers truly "one of a kind".

Flicka, which means "happy little girl" in Swedish, is a fair if perhaps inadequate description of this legendary cruiser. The hand-laminated Flicka features a balsa-cored deck (plywood in hardware-mounting areas), backing plates for every piece of deck equipment (caulked on both sides), and eighteen hundred pounds of solid cast lead encased in fiberglass. What's the Swedish word for "bulletproof"?

With a fixed draft of 3' 3", the Flicka draws more water than most boats found in the pages of SCA, but, compared with vessels of similar capabilities, it's relatively shallow draft." 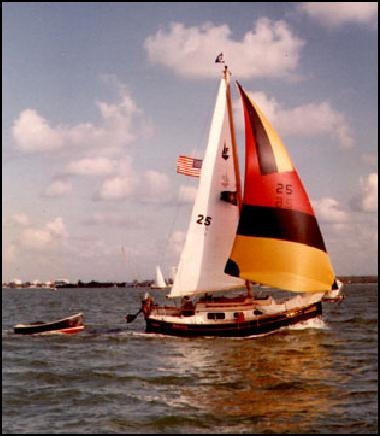