After having seen her sit on a cradle for a year ( while she was built ), it was pure pleasure to see her in her own element. The experience of sailing her for the first time -- to feel her surge through the water as though she had been a cooped up animal and finally been set free -- was beautiful." Niki Butcher, Sea Shanty - The Biggest Littlest Boat in the Harbor, "Pacific Skipper", September 1977.

After my shipmate and I purchased Sea Shanty from her second owner and started the rebuilding process, we wanted a name which reflected our thoughts and feeling. We purchased a boat name book but did not find a name which was "us." My shipmate suggested "Sarajevo" in honor of the people and city that had hosted the Winter Olympics. We tested the name on several friends and decided the "ratings" were too low.

Our next attempt was to evoke the gods. We choose "Erzuli" a Haitian goddess. Again, we tested the name on friends. "What!", How do you spell that?", "Where did you find that name?", How do you pronounce that." were several of the replies. George Moss, a very dear friend and mentor to the rebuilding of our boat, suggested a boat name should be easy to spell and have hard syllables for clear radio transmission and reception. This made sense to us, after all, how many bluewater sea miles did we have - zero.

One evening, after reading an article about the origins of Homo-sapiens, I suggested "Afrika." My shipmate looked at me and said, "African Moon", "African" in honor of our human origin and "Moon" because our last boat was named Blue Moon.

We purchased the Sea Shanty / Dolphin Spirit (hull #18) this past fall in Seattle WA.  As you know, this is a special Flicka not only because of its former owners but its design as well.  To my knowledge it is the only Flicka with as aft cabin.

We had a custom trailer built for her and transported her to our home in the Coast Range mountains of Oregon near the town of McMinnville. We are in the process of completing a storage builiding that will allow us to carry out a  restoration (actually in good mechanical shape) and protect her from the elements. For the time being our plans are to sail and keep her in the Puget Sound from spring thru fall and back here in storage during winter.

Our home/farm is at about 900 feet elevation with vineyards all around us.  Sitting in the boat you can see mountains, canyons and valleys as far away as 40 miles. Perhaps not a bad place for a Flicka when not in the ocean.  We will send photos soon showing the boat and her surroundings.

My main purpose in writing other than to give this up date of the boat's condition and whereabouts, is to try to locate any of its former owners.  We would like to be able to recreate the history of this special little boat. Any help or suggestions you might have would be appreciated. 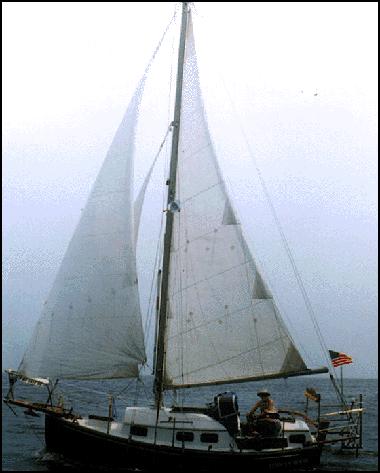